Geany, a small and lightweight IDE - My experience 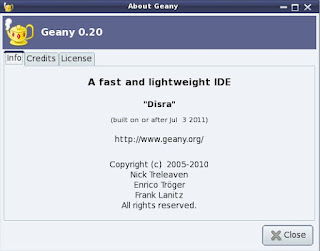 One of Integrated Development Environment (IDE) i have been using is Geany, it's my second IDE for my programming, especially in PHP. My main IDE for PHP is Netbeans for PHP which i have ever been told some times ago in this blog.

This article will talk about Geany and my experience use it.But because Netbeans is my main IDE and Geany is my secondary one that doesn't mean that Netbeans is more suitable for everyone than Geany. The condition and your own taste decide it.

Geany (www.geany.org) is a small and lightweight IDE and i often use it to open a single file not in a file under project. For that reason, i use Netbeans because it provides project management, while Geany i never use the project management tool it has which is more simple than Netbeans.Some basic features in Geany are :
- Syntax Highlighting
- Code Folding
- Auto closing of xml and html tags
- Symbol list
- Code Navigation

Geany is same level with Notepad++, both of them are a small and lightweight IDE and good in PHP programming. Geany also suitable for other programming languages or script such as C/C++,Java,Html,CSS,Phyton and Perl. And it is under GNU license so we can use it freely. Free and great that's 2 words for Geany besides small and lightweight.The last version today is 0.21 but although still under version 1.0 the ability as small IDE is good.

If you do a middle and big project, particularly in PHP moreover do in a team, Netbeans for PHP is more suitable than Geany, because it support with features which easier your task in project management, debugging and subversion.
But if you open a or some files not in a project , Geany is better than Netbeans. Geany is also good in doing a little project. In doing coding, Geany is good and nice to use, already supported with some features, i already mention above.

Because i do a middle and big project as well as often open a or some files out of project, so i use both of them Netbeans and Geany and i feel comfortable with them.

Geany besides available in Linux, it is also provides Windows Binary, so for you as Windows user you can use it too. I myself use Geany for Linux version.

So if you are looking for great, small and lightweight IDE, what are you waiting for, go to its website, download the application, install it and start to use it. If you want more information about Geany, you can visit the site too.

My favorite PHP editor is Codelobster

Yarilet Perez is an skilled multimedia journalist and fact-checker with a Master of Science in Journalism. She has worked in a number of} cities masking breaking information, politics, training, and more. Her experience is in private finance and investing, and real property. Full BioChris Neiger has 10+ years of expertise writing for each print and online publications. His 코인카지노 work has appeared in the BBC, The Motley Fool, and AOL. Wide screen TVs throughout the on line casino floor maintain you tuned in to the latest information and sports activities.