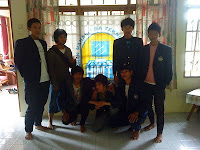 Tonight, i just arrived at home from Puncak, West Java where familiarise night (malam keakraban (makrab)) was done well, Alhamdulillah. The program was held on 29 - 31 of Oct 2010. I went to the location together with members of Makrab and the organizing committee by 2 middle size bus of campus. The program was participated by about 40 members and 20 Himti members add with some HIMTI Alumni including me. This Makrab was organized by HIMTI (Himpunan Mahasiswa Teknik Informatika) Universitas Budi Luhur, Jakarta. I am as an alumni of HIMTI. I was a coordinator of R & D on periode 1999 - 2000 and 2000 - 2001.
We went there at friday afternoon, 17.00 and arrived at the destination at about 19.30. The committee rent a big villa and it's enough to load all of participants.

The first night, we have dinner and opening program before went to slept. Tomorrow, saturday, Oct 30 2010, first ,we had a morning exercise, breakfast and having a lecturer. I delivered the first lecturer with a theme, "Mau ke mana setelah lulus kuliah ?". It took about 45 minutes and no question from the members. Actually, i like one or some questions in that lecturer, so there was a discussion and exchange information between us, me and the members.

There was also a second lecturer, delivered from one of committee member, it was Flash training. It took a sample program in game flash. Lunch at the noon and on the afternoon about 16.00 - 18.00, we had a field game but i could not join the game, because at the same time, The big match party, Persija vs Persib was held, live on Antv and for me, moreover i can watch it on TV, is difficult to miss it :). The match was end by Persija Winning over Persib 3 - 0. Mmh, not useless miss the game, I am apologize for this.

At night, saturday night, there are some alumni of Himti came to the villa, by car and motorcycle. And at that night too, a campfire was held along a performance of play from each group. Talking about groups, the committee divided the members into some groups, if not mistaken, 4 groups. After the plays, alumni of HIMTI introduced themselves, one by one at that night. The program ends about 24.00.

After that, we entered to the villa and went to bed but some of us did other activities such as talk together and watched TV. I chose went to bed.
On the tomorrow morning, we went to a camping area near the villa, it was about 1 km far. We walked there together and along the way, we enjoyed the scene view and took some pictures. On the destination, we stopped at the cold clear water river. We took some pictures and enjoy the river. I even plop in the river, mmmh ... it's cold and fresh.

The activities continued at the villa, some of them played football, went swimming in the pool and some of them went slept, maybe continued their unwell sleep at night ..:).

On the afternoon,there was a talked, we gathered in a room. the members uttered about his own impression and message after joining in this Makrab, the conclusion was they were happy and satisfied although there are some minus point in some things . I think the overall is, the Makrab was Great !.

At 14.00, it was time for prepared to left the Villa but before that we took some pictures .. Again ...
And about 14.15, we entered the bus to back to Jakarta. We stopped at one place to bought something to bring to our home respectively.

There was something extra ordinary happened in my bus while the bus on the way , there was a member, female, who entered by jinn, female jinn exactly. The jinn promised to got out from her body if all of us apologized to her because we had disturbed her when we played at the pool, uttered her. Yes, on saturday afternoon, we played a game and there was plopped a person into a pool , of course with scream, laugh and run also pulled each other.wet ..wet ..wet. Alhamdulillah, the Jinn got out after all of us apologized to her but there was also effort to forced her to got out from the body, because even though all of us had apologized to her, she seem not went out from her body, i recited some Al-quran text which i think could make her to went back to her place.

Concurrently with Azan of Isya, we arrived at our campus, Universitas Budi Luhur and we went home to continue our daily life respectively.