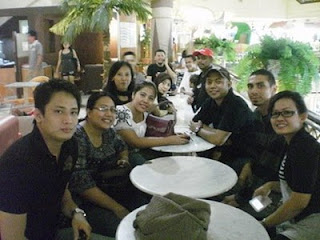 On Saturday, saturday afternoon and night exactly on Oh la la cafe, Bintaro Plaza, South Jakarta, April 17th 2010,i attended a small reunioun of former student of SMAN 63 Jakarta, year 1997. I call a small reunion, because it just attended by about 40 participants, not so many if we compare with the total number of former students of year 1997, it's about 337, but i think it was a great reunion, because 40 friends were so many, regarding it planned in a short time and in a practical way. Imagine, we decided the cafe just see and enter directly, not order first, Alhamdulillah, we found a comfortable place to load about 40 persons . In addition i myself knew that message 2 or 3 days before the reunion had held from facebook.The program planned in a short time but we did.Alhamdulillah.
The ambience of that reunion is quite cheerful, we share stories and asking about our friends dispatches which is so many each of us have not been met for a long time. It's nice to meet again. Some friends have married already and even has kids including me, i have 2 kids but some not yet, hopefully for those who haven't married yet, Allah gives you a suitable couple for you.Amiin.
This is a second reunion i attended after a reunion in Blok M Plaza at Solaria restaurant on month of Ramadhan 1430 H/ August or September 2009, break fasting together. The previous reunion just attended about 25 friends. On this reunion,The program was just talk and meet together and taking some pictures. After that, we uploaded the pictures on Facebook and commenting them :).

In general, the program was great. I noticed the lack was about the food, the food price was expensive and not make us full, because the cafe just provide d drinking water and breads, not rice. Yes, it is a cafe not restaurant and i am not accustomed with cafe, just my fault ? maybe. Other lack was, there were some glasses fell down on the floor accidentally but it just nothing, i hope. But those could not influent the cheerful of the reunion. Meet and share first, food later :).However, The reunion was still great and unforgetable.

Unfortunately, i don't know the end of the reunion, because at about 20:30, before the program end, i went home earlier because of something, but at least i spent the major time on that reunion. And hopefully i did not miss something important at the end of program.
Thank you friends and hopefully we can meet together in the next opportunity with more friends can join and Wish us Luck in our daily life . Amiin.
Di tulis oleh : Akhmad Sofwan at 6:41 PM No comments: